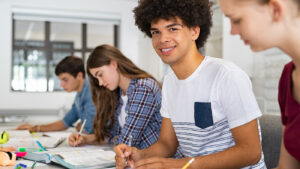 Sweaty palms, a knot in the stomach, a sudden inability to comprehend the simplest sentence, a cloud of doom descending….

Most people know these symptoms of anxiety first-hand through one experience or another – freezing up when called on by a teacher, botching a speech in front of a large audience, stage fright while performing in a play. Depending on the severity of the anxiety, the effects of anxiety can be debilitating.

Before proceeding, we must acknowledge that some anxiety before a test, or one of the public performances listed above, is actually quite normal. In fact, some studies have recently shown that some anxiety is not only normal, but also quite beneficial. Anxiety is one’s natural reaction to a stressful situation.

When a stressful situation arises and one is forced to perform, the body reacts in ways that are intended to heighten awareness, increase oxygen flow to the brain and body, and sharpen senses – all very positive reactions that will help one perform at their peak when the time is right.

However, problems arise when the anxiety levels become so severe that they negatively impact one’s ability to concentrate and perform.

Approximately one-third of students experience severe anxiety during testing situations, a condition known as test anxiety. But as with the various forms of anxieties above, there are clear steps one can take to decrease test anxiety’s negative effects, both by reducing one’s likelihood of experiencing anxiety in the first place and by successfully coping with anxiety when it arises.

Anxiety before the test

For many students the very thought of an upcoming test can trigger anxiety. This “pre-test anxiety” can be especially harmful, since it can interfere with your preparation for the test in the first place. Not only can anxiety decrease your ability to retain the information you learn while studying, the very fact that studying for the test is itself a source of anxiety makes you less likely to study to begin with. In addition to the tips discussed below, one who experiences pre-test anxiety should develop a clear, easy-to-follow study plan – and stick to it. Many students find it helpful to study with others since they can be a source of encouragement and support. This is why many students with pre-test anxiety benefit from test prep in a class setting.

The components of anxiety

Anxiety has three components – a bodily component, an emotional component, and a performative component. One way to think of these components is as in terms of a complicated system of feedback connections. For example, in a situation that triggers anxiety one has bodily sensations of various types – butterflies in the stomach, weak or trembling legs, shortness of breath, etc. These sensations are accompanied by emotions of self-doubt, expressed in thoughts concerning past failure or the inability to master a particular skill, for instance. These bodily and emotional responses in turn negatively impact one’s ability to perform a wide range of tasks, including those involved in test taking. This inability to perform tasks that may even be routine under other circumstances then reinforces the negative bodily and emotional responses, resulting in a spiral of gloom and doom.

Psychologists have determined that successful approaches to reducing test anxiety address each of these components, either alone or in combination. Moreover, successful approaches to reducing test anxiety involve not only techniques for dealing with anxiety during the test, but also techniques for reducing one’s anxiety response to the idea of taking the test itself. These techniques are not instant panaceas, but instead require practice to master. Developing techniques for reducing anxiety should be a standard part of your test preparation plan.

Reducing anxiety requires breaking the web of feedback responses, and the first place to start is the body. Relaxation techniques should be a priority for anyone who experiences severe anxiety. There are a number of well-known relaxation techniques that you might try, but most involve one or the other of two components: controlled breathing, and quiet attentiveness.

Generally, your first response to anxiety will be to focus on your breathing, attempting to take long, deep breaths while attending to the sounds and sensations of the air slowly moving in and out. With practice this will reduce the unpleasant sensations associated with anxiety and result in a calmer state that puts you back in control.

In addition to practicing controlled breathing, some time during the weeks before the test should be spent practicing quiet attentiveness. The first step in developing this ability is to try to focus on your breathing to the exclusion of everything else – especially that unending, meandering internal monologue that is the constant companion of each of us. Unwanted thoughts will persist; just try to focus on your breathing. Once you have slowed your thoughts, next attend to your bodily sensations. A commonly recommended method is to “scan” the body, beginning with the top of your head, for instance, and slowly moving down the body, trying to notice each sensation occurring there.

Developing these relaxation techniques will not only help to reduce your pre-test anxiety, but also will provide you with valuable tools when anxiety strikes during the test itself.

The “half empty/half full” game can help you accentuate the positive.

Relaxation is an important part of any anxiety reduction plan, but it only goes so far. The next step is to avoid (or at least reduce) those emotionally charged negative thoughts about the test that directly impact your ability to perform well on it. This, of course, is much easier said than done. And like the relaxation techniques discussed above, it requires concerted effort in the weeks before the test to be able to successfully replace the self-destructive, negative thoughts about the test with other (true!) thoughts that instead provide encouragement and build confidence.

A closely related technique involves imagining that you are taking the test, and that anxiety strikes. The goal is to practice your techniques for dealing with anxiety in this imaginative setting so that on test day you know how to effectively respond. For example, one would imagine taking a few deep breaths, recalling some relevant, true thought (“this problem is not that important; I can skip it if I want”), and resuming the test with minimal disruption.

Students with test anxiety may benefit from taking practice tests.

Of course, reducing your anxiety is not enough to guarantee success on test day; you must also be well-prepared. For those who suffer from test anxiety, the goal should be to become so familiar with the questions on the test and the common tasks required of you that test taking becomes a matter of routine, like brushing your teeth or tying your shoes. In other words, solving test questions should become as much a matter of reacting to familiar situations as it is a matter of thinking about how to solve problems. This is why students with test anxiety probably benefit more than the average student from taking many practice tests, and under circumstances as much like the actual test as possible. The familiarity that results from repeated exposure to the testing situation not only serves to reduce anxiety itself, but it also helps to routinize your test taking so that anxiety is less likely to interfere with your test taking if it does occur.

Moreover, after several weeks of preparation you will notice improvements in your test taking performance. They may be small improvements, and there may still be much that you have to work on. But thinking about those parts of the test that you have improved on will serve to reinforce a positive attitude toward your preparation and provide a foundation for further improvement.

4. PUT THE PIECES TOGETHER

Remember, a little bit of anxiety is a good thing and will help you perform at your best on exam day. Taking steps to control anxiety is an essential part of a successful test preparation plan. Effective management of anxiety requires practice, and the techniques described here should set you on the path to a less anxious, and more successful, testing experience.