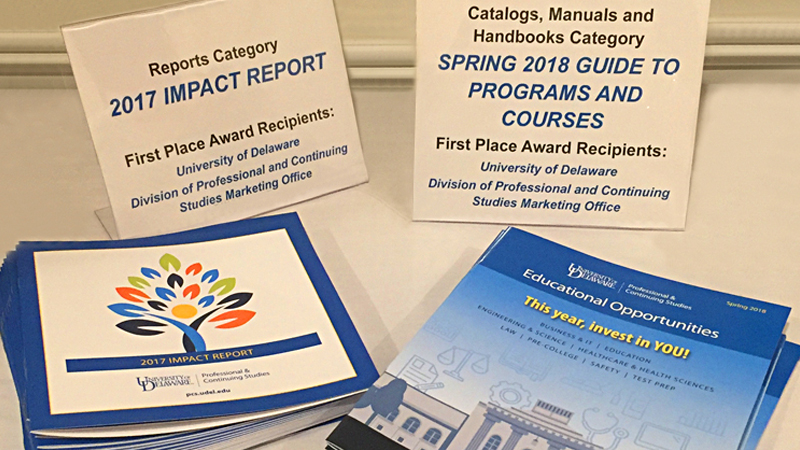 The University of Delaware’s Division of Professional and Continuing Studies (UD PCS) was recently recognized for its marketing and communications efforts at the state level by the Delaware Press Association (DPA) and at the national level by the National Federation of Press Women (NFPW).

Two UD PCS publications, the Spring 2018 Guide to Programs and Courses and the 2017 Impact Report, earned first-place awards in the Delaware Press Association Communications Contest, while the 2017 Diversity Summit Poster and the 2017 Invest in You ad campaign received second-place honors.

As first-place selections in the statewide competition, the guide and the impact report were selected to compete against winners from other states in the 2017 NFPW Communications Contest. In the national competition, the Spring 2018 Guide to Programs and Courses earned first place, and the 2017 Impact Report finished second.

Competing in the Catalogs, manuals and handbooks and the Reports categories, the entries from the UD PCS marketing and communications team received praise from the DPA judges.

Feedback on the guide included the following:
The bi-fold guide provides useful information to potential publics. It is clearly based on good teamwork. Informative and visually appealing.

Feedback on the impact report included the following:
Starting with the one-page statement, this judge was drawn into the team’s experience. The first-person narrative made it personal. In a mere five pages, the report communicated the program’s philosophy, purpose and professionalism. Punchy headlines told the story. There was power in the numbers. The report is aptly named. It delivered a High Impact read.

Steven M. Kendus, UD PCS marketing and communications manager, is appreciative of the recognition as well as his team’s contributions. “Teamwork, teamwork, teamwork,” he said. “Producing 11 catalogs a year, promoting dozens of programs, and addressing the rest of the marketing and communications efforts of UD PCS are daunting tasks, but the combined efforts of the UD PCS team members continually drive us toward success. We are grateful for the awards from the DPA and the NFPW because they gain recognition for and show the value of all continuing studies programs and serve as a testament to coordinated teamwork.”

The Delaware Press Association is a network of more than 150 journalists, broadcasters, public relations specialists, graphic designers, photojournalists, educators, authors, poets and freelancers who are dedicated to the highest standards of excellence in communication and to protecting First Amendment freedoms. The annual DPA Communications Contest is open to all professional communicators in Delaware and encourages and rewards excellence in communication. The contest is judged by out-of-state communications professionals to ensure impartiality and provides communicators opportunities to compete in various categories.

The National Federation of Press Women is a nationwide organization of professional women and men pursuing careers across the communications spectrum. The NFPW Communications Contest encourages and rewards excellence in communications in a wide range of categories. Entries are judged by leaders in their fields of expertise.