Deciding between the SAT and ACT 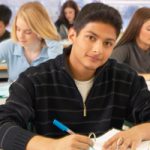 Getting ready to apply to colleges is a long, complicated process that involves many important decisions. One of the most consequential decisions you will make concerns which college admissions exam to take – ACT or SAT.

Which test should I take – ACT or SAT?

Let’s talk a bit about these tests, and what you should consider when deciding which test is best for you.

In many ways the ACT and SAT are similar, and should be relatively familiar to any U.S. student who has taken the various standardized tests required of them in high school. Both tests contain math sections, reading sections, and sections testing grammar and sentence construction (English and Writing, respectively). But there are significant differences in the ways the two exams test these subjects. Moreover, the ACT contains a section with no counterpart on the SAT – the Science section. Understanding these differences is important to choosing which test you should take, so let’s talk about them in more detail.

So, the math tested by the ACT is slightly more advanced than that tested by the SAT. On the other hand, SAT problems are more likely to involve clever problem solving techniques that stress critical thinking as much as the math content itself. Moreover, while the ACT math test consists entirely of multiple choice questions, the SAT contains a number of questions that require you to fill in a number.

The ACT and SAT both test a similar range of reading and English grammar and construction skills. Both tests contain multiple choice questions that focus on grammar and construction, such as the familiar reading comprehension questions. The SAT contains additional sentence completion questions. Both tests include an optional essay; however students should carefully review admission requirements at the colleges where they’re considering applying, as some colleges will continue to require a standardized test essay.

The most significant difference between the ACT and SAT exams is the inclusion of a fourth test – the Science test – on the ACT. The Science test consists primarily of short passages accompanied by charts and graphs, often in the context of reporting experimental results. The questions test your ability to comprehend the material in the passages, graphs, and charts, including understanding the objectives and methods of any described experiments, as well as to make reasonable inferences based on this material. It is important to note that the science test does not test scientific knowledge; all of the information needed to answer the questions is contained in the passages, graphs, and charts.

The impact of this additional section of the ACT can be enormous. First of all, despite the test’s name, the skills required of the Science test are largely verbal; being able to extract information quickly from passages and charts is essential. Thus, students whose verbal skills are strong and who are not intimidated by charts and graphs tend to perform well on this section. Secondly, the Science test tends to dilute to contribution of the math test to one’s overall score. Therefore, a student who is exceptionally strong at math but less strong in verbal areas might prefer the SAT, since she will have a third of her score determined by the math test on the SAT but only a quarter of it determined by the math test of the ACT. Conversely, a student with exceptional reading and verbal skills might prefer the ACT, for the same reasons.

There are other things to consider before deciding which test to take. For example, what resources are available to you? If all of your friends are taking one of the tests, all things being equal it probably makes sense for you to take the same test, since you will be more likely to benefit from the advantages of preparing with a group rather than by yourself. Similarly, which test is more familiar to your high school teachers, or other educators who might offer you test prep guidance? All of these factors can be relevant to choosing the right test.

Of course, the best way to choose is to try each test for yourself, and compare your performance. Free tests are available at actstudent.org and sat.collegeboard.org.